When, in Exodus 25:1-2, Torah tells us “The Eternal One spoke to Moses, saying: Tell the Israelite people to bring Me gifts; you shall accept gifts for Me from every person whose heart is so moved,” the text manages to be both inclusively open and exclusively specific. We tend today to read this invitation as an equalizer; no matter the gift, God will accept it. The most important quality of the gift is the zeal of the giver to share it. But building the Mishkan required specific materials: gold, silver, copper, fine linen, dolphin skins, for example. Any gift not found on this list would not be of much use. Did every Israelite possess something on this list?

Not all gifts are equal in value. Not all materials are central to a project. In making a request of the community, sometimes we are not specific enough about our needs, for fear of offending those who may not feel included. But in valuing willing energy over specific skill, we lose the opportunity to empower those who could rise to lead.

In this opening instruction of the parashah, Torah also clearly struggles with how to word such a request. How does a developing community welcome and include all while also elevating some over others? Did the community really want all gifts or only the ones most relevant to the task?

Perhaps the text hoped to move the heart of the individual who would hear and understand that she had a valuable contribution to make, in material or skill. When the details of a project speak to your particular strengths, you are required to step up and participate. We must be willing, when the call comes, to evaluate ourselves and know when it is our time to lead. Do not fear the display of confidence or bounty. The success of the community relies upon your heart being moved at the right time.

“Praise God, even if God takes your life”

Thank you to RS Board member David Mandell, ScD, for offering these words on the post-election world, gratitude, and a congregational learning opportunity.

“Praise God, even if God takes your life”

I am heartbroken by the results of the presidential election. I alternate between deep mourning and rage. Yesterday morning I expressed my anguish to a colleague from Turkey. She said that she too is disappointed but was not experiencing the same depths of despair that I was. She pointed out that living in the United States is still preferable to the violence and unrest in Turkey. A Russian man told me, “so your party lost? At least you have two parties. And you’re not thrown in jail for not being a member.” Another friend listened in on a phone call with President Obama, who gave us permission to mope for a week, and then have to get back to work. We’ve made a huge difference to the country and if 20% of it gets rolled back, 80% is still left.

In these three moments I felt hope. And driving that hope was gratitude. END_OF_DOCUMENT_TOKEN_TO_BE_REPLACED

“Then They Came for the Jews”

I have been horrified and heartbroken to hear hate speech spoken, and worse, accepted without repercussion, in so many circles of American life.  From the anti-Israel and anti-Semitic “scholarship” and responses at my husband’s alma mater, Vassar College, as well as other campuses, to candidates and their followers who scapegoat people of different backgrounds from their own, our society is too slow to see that when someone else’s humanity is sacrificed, so is our own.
Amidst such failures in our world, I am heartened to discover souls who see beyond their own identity, who can lift their eyes to see the humanity in the other.  I am grateful to our congregant Susan Friedenberg for introducing me to Holocaust scholar Doug Cervi, who will be our guest this Sunday, May 1, 10:30am, when he facilitates for us a conversation with a Holocaust survivor and that survivor’s liberator.

END_OF_DOCUMENT_TOKEN_TO_BE_REPLACED

Did you see or hear Stevie Wonder present an award at the Grammy broadcast last week?  He opens the envelope.  Then with everyone on the edge of their seats to hear the winner of that category, he turns his opened envelope towards the audience, to show us all the braille, as he chants with a smile, “You can’t read it; you can’t read braille, ah-nah-nah-nah-nah-nah!”  And he takes another second to relish the moment when, he could access information, that the seeing-audience, could not.  Stevie Wonder follows with the statement: “We need to make every single thing accessible to every single person with a disability.”

Does Stevie Wonder know that February was Jewish Disability Inclusion Awareness month?  Perhaps not.  Last month, designed to bring more awareness to disability inclusion in the Jewish community serves as a nice excuse to shed light on some challenges and opportunities we see in our spiritual life here at Rodeph Shalom. END_OF_DOCUMENT_TOKEN_TO_BE_REPLACED 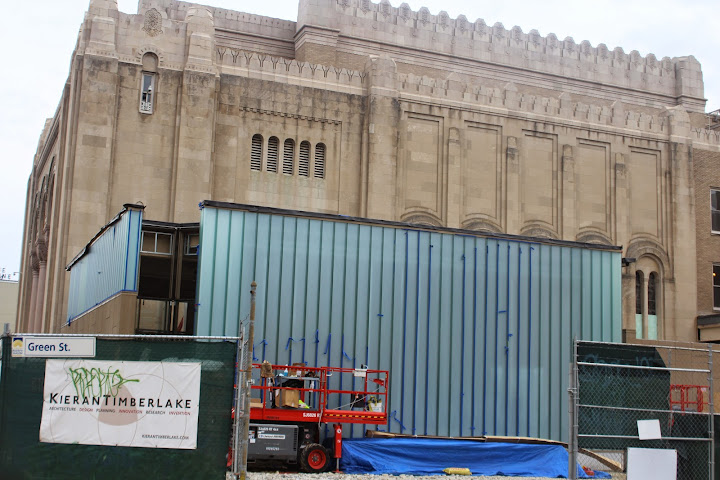 It has been so exciting to see the expansion go up here at Rodeph Shalom.  And now here we are, almost complete, with the May 17 Dedication happening this month!  In last weekend’s Sunday seminar, our expansion chairperson Michael Hauptman taught that the master planning for the space began in 1992!

The meaning of our new addition is certainly not limited to bricks and mortar.  The power of the renovation and expansion has been that, every step of the way, our leadership’s decisions have been mission-driven, fueled by our vision of the people and purpose who will fill its space.  Not once has this congregation set out to create a museum; this is a center for living Judaism, where we honor the past, celebrate the present, and shape the future of Jewish life in Philadelphia.

And so it made sense when, about a year ago, a congregant suggested we consider a Jewish text, that might appear on the external Broad Street wall.   END_OF_DOCUMENT_TOKEN_TO_BE_REPLACED

On Public Shaming, a Compassion Deficit and Monica Lewinsky

This week’s Torah portion, Shmini, describes what can serve as a korban–a sacrifice.  And when the wrong thing is used as a korban, tragedy results.

Recently, Monica Lewinsky has made the news, because she has begun to speak publicly about the media storm that consumed her identity.  Now at the age of 41, the former Whitehouse intern reflects back when she was 22, and made serious and foolish mistakes, when she began a relationship with her older and exceedingly more powerful boss, the then president of the United States.  Lewinsky’s boss abused his power and her friend violated her trust.  Still, the most painful part of the experience for Lewinsky was the public humiliation she endured.

In 1998, our society allowed the wrong thing to be used as a korban–a sacrifice– when Monica Lewinsky became the first person to be publicly shamed in the age of the internet.  Everyone knew her mistakes, many seemed to derive joy from degrading her, ostracizing her, reducing her to her faults, and exaggerating them beyond recognition. END_OF_DOCUMENT_TOKEN_TO_BE_REPLACED

Can Jewish Texts Expand Our Thinking?

“Can Jewish Texts Expand Our Thinking,” the latest article from “Rabbis Uncensored,” the Philadelphia Board of Rabbis’ blog, includes a response by Rabbi Jill Maderer.  Do you find yourself in conversation with others who already share your opinion?  In what kinds of interactions do you find your thinking expands?  Comments welcome!